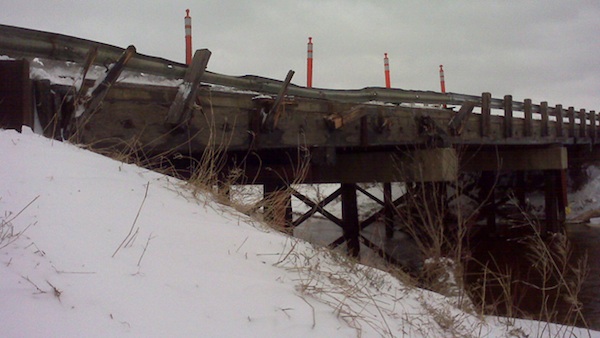 Two soldiers based at CFB Shilo were killed Sunday when their vehicle broke through a guard rail on Provincial Road 457 and landed in Willow Creek. A third soldier died in hospital on Monday. (BRADY STRACHAN / CBC / USED WITH PERMISSION)

A third solider based at CFB Shilo has died as a result of injuries suffered in a rollover accident near Brandon on Sunday.

RCMP had previously reported two soldiers had died, but on Monday, the Canadian Forces confirmed a third soldier had succumbed to his injuries.

All three men were members of the 2nd Battalion Princess Patricia’s Canadian Light Infantry (2PPCLI) and were killed when the SUV they were travelling in broke through a guard rail on Provincial Road 457 at about 12:30 a.m. The vehicle landed on its roof in Willow Creek below.

Privatess Scoular and McLachlan had been posted at CFB Shilo since July 2010, while Corporal Wright had been at the base since 2008. He had been on one tour to Afghanistan in 2009.

“We are deeply saddened by the loss of Daniel, Brayden, and Yannick and our hearts and deepest sympathies go out to their families.” said LCol Shane Schreiber, Commanding Officer of 2PPCLI in a statement. “They were excellent soldiers, friends and young men, and they will be very much missed by their comrades in the Regiment.”

A fourth soldier was also injured in the crash and remains in hospital.

Funeral services for Scoular, McLachlan and Wright will be held in accordance with the wishes of their families.

CFB Shilo will hold a separate memorial service for the three men at a later date.