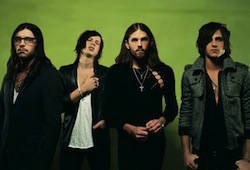 American rockers Kings of Leon are coming to Winnipeg this fall.

The band will play MTS Centre on Tuesday, October 4 with special guests.

The show will be in support of their latest album, Come Around Sundown.

Tickets go on sale Friday, May 6 at 10 a.m. through Ticketmaster.

Editor’s note: An earlier version of this story stated Kings of Leon would be playing in Winnipeg on October 5, as originally announced by promoter Live Nation. The date of the concert has since been changed to October 4.