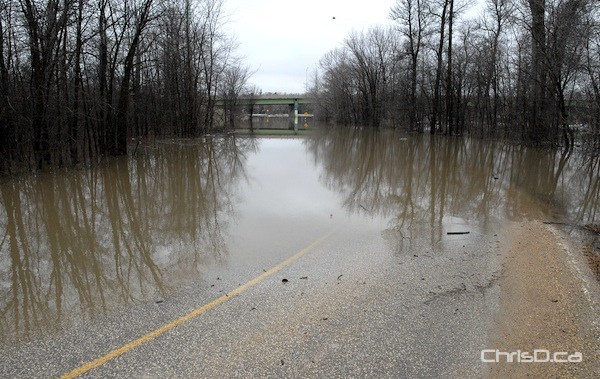 Cloutier Drive near the South Perimeter Highway bridge was covered by water from the Red River in early April. Water levels have since subsided. (STAN MILOSEVIC / MANITOBAPHOTOS.COM)

As the Red and the Assiniboine Rivers finally begins to crest in Winnipeg, water levels will still remain much higher than normal for several more weeks.

On Wednesday, the James Avenue reading reached an open-water crest of 19.6 feet above normal levels. The current flow of the Red River is enough to fill an Olympic-size swimming pool every two seconds, according to flood officials.

At-risk homeowners are reminded to remain vigilant and to shore up dikes as water pushes up against protective barriers due to strong winds.

While water levels remain high, they are still significantly lower than if the Red River Floodway wasn’t in place. Levels would be 11.4 feet higher without the floodway, Portage Diversion and Shellmouth Reservoir.

The city says high flows on the Assiniboine River today are hitting peak levels on the upper portion of the river from Moray Bridge to the Perimeter.

Meanwhile, the Winnipeg police have banned all boats from the rivers due to high water levels and fast-moving currents. Police also warn hidden debris may be present, creating dangerous conditions for anyone on the water.

Residents are also asked to stay away from all river banks and dikes.