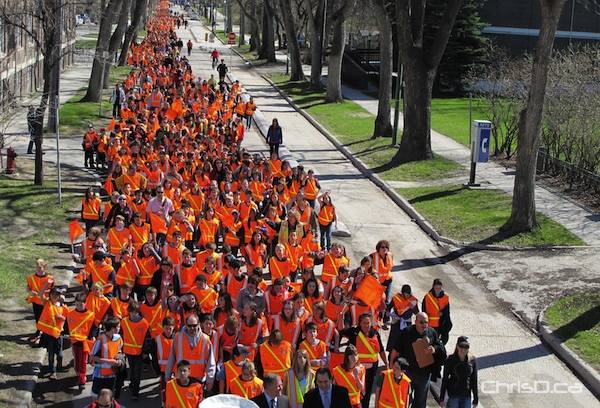 School patrols march from The Forks to the Manitoba Legislature on Thursday, May 5, 2011. (CAA MANITOBA)

May 5 has been proclaimed “School Safety Patrol Program Day” by the Manitoba government, which accounts for about 8,000 Winnipeg students, with nearly 200 public and private elementary schools participating during the school year.

This morning, students took part in a parade from The Forks and made their way to the Manitoba Legislature for a patrol assembly.

“We’re proud to mark this important milestone by recognizing our patrols for their efforts, and also by reminding motorists that school zone safety is their responsibility too,” said Mike Mager, president and CEO of CAA Manitoba.

Safety patrols are picked based on their leadership skills and ability to become role models, as well as their academic performance and maturity.