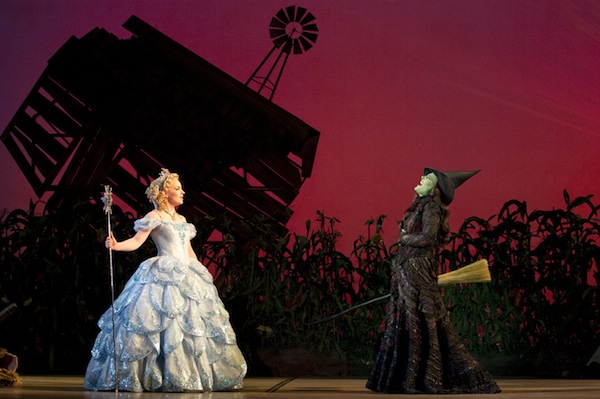 Vicki Noon and Natalie Daradich, part of the cast of "Wicked," playing August 24 to September 4, 2011 at the Centennial Concert Hall. (JOAN MARCUS / HANDOUT)

The Tony Award-winning musical Wicked is coming to Winnipeg this summer.

Wicked, presented by Broadway Across Canada, will make its debut at the Centennial Concert Hall on August 24 and run until September 4.

Tickets don’t go on sale until Saturday, May 14, but you can get yours early by using the presale password FIYERO at Ticketmaster beginning at 10 a.m. this morning until 10 p.m. on May 13.

So much happened before Dorthy dropped in…

Long before that girl from Kansas arrives in Munchkinland, two girls meet in the land of Oz. One – born with emerald green skin – is smart, fiery and misunderstood. The other is beautiful, ambitious and very popular. How these two grow to become the Wicked Witch of the West and Glinda the Good makes for “the most complete – and completely satisfying – new musical in a long time” (USA Today).

On Broadway and around the world, WICKED has worked its magic on critics and audiences alike. Winner of 35 major awards, including a Grammy and three Tony Awards, WICKED is “Broadway’s biggest blockbuster” and “the defining musical of the decade” (The New York Times).

Other stops on the Western Canadian tour include Vancouver, Calgary, Edmonton and Saskatoon.