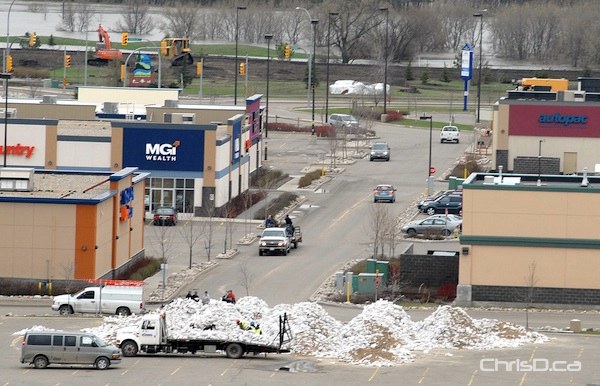 The Corral Centre on 18th Street in Brandon has been ordered evacuated. (STAN MILOSEVIC / MANITOBAPHOTOS.COM)

City officials in Brandon have ordered the evacuation of the Corral Centre — one of the largest shopping areas in the north part of town.

The next door Paddock business centre is also facing evacuation, as water levels on the Assiniboine River are projected to rise by another 20 centimetres.

The river is now expected to crest over a prolonged period between May 18-20, and sat at 360.49 metres above sea level at First Street Thursday morning.

Meanwhile, a few stubborn residents could face fines up to $50,000 if they don’t evacuate their homes as ordered. There are reportedly three households where occupants still remain, despite being asked to leave for their own safety.

The dike between 6th Street and 18th Street is expected to be raised another foot today to accommodate a projected crest of 1,184 feet, plus two feet of free board.

There are currently 1,326 registered evacuees in the Wheat City.