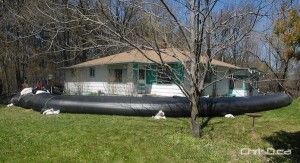 A home along Road 62 North in the RM of Portage la Prairie near Hoop and Holler Bend is surrounded by a tube dike on Sunday, May 15, 2011. (STAN MILOSEVIC / MANITOBAPHOTOS.COM)

Three homes have been surrounded by water in and around the area of the controlled release near Hoop and Holler Bend.

During an afternoon flood briefing, provincial officials said the protective measures placed around the few properties are maintaining. Sandbags, earth and tube dikes are continuing to hold.

The area affected by the deliberate breach of a dike along the Assiniboine River now only includes 180 square kilometres of land, which is made up of mostly fields southeast of Portage la Prairie. Earlier estimates put the widespread water to travel 225 kilometres.

Water is continuing to flow at a rate of 400 cubic feet per second (cfs) and won’t likely go above 1,000 cfs in the coming days, but will be increased to about 500 cfs on Tuesday.

Across the province, there are 3,623 Manitobans evacuated from their homes, and 1,500 Canadian Forces soldiers and reservists fighting the flood.