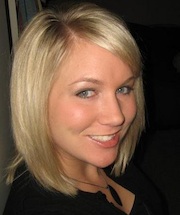 Courtney Ketchen will begin her new gig Tuesday morning, but will make a brief appearance Friday to be introduced to viewers.

The Winnipeg native most recently worked as an anchor and reporter in Thunder Bay, but also spent time at CHCA News in Red Deer, Alberta.

Ketchen takes over for Brian Yasui, who was let go from the station in January.