Jets Fans Rally in the Streets Over Report of NHL Return

About 200 people gathered at Portage and Main Thursday night to celebrate the reported return of the NHL to Winnipeg.

With renewed enthusiasm after a hockey void left by the departing Winnipeg Jets in 1996, fans began chanting, “Go, Jets, go!,” shortly after 9:30 p.m. 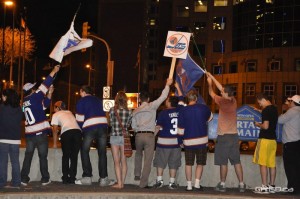 Hockey fans gather at the corner of Portage and Main on Thursday, May 19, 2011 to celebrate news of a potential return of the NHL to Winnipeg. (SAMANTA KATZ / CHRISD.CA)

The celebrations lasted way beyond midnight, as Winnipeg police permitted fans to make their way to the centre of the street to extend the party.

The excitement comes after a report on the Globe and Mail website late Thursday, which suggested the Atlanta Thrashers would be relocating to Winnipeg after being purchased by True North Sports and Entertainment. True North, which also owns the Manitoba Moose and MTS Centre, denied the report, as did NHL commissioner Gary Bettman. According to the Globe, the announcement is to officially be made on Tuesday. Details of the deal, including cost, were not released.

But skepticism didn’t put a damper on the celebratory mood that blew across the city. Twitter and Facebook couldn’t keep up with the prospect of professional hockey returning to Winnipeg. For a while, the term “Winnipeg Jets” was trending worldwide on Twitter.