Home » Sports » Badminton Camps Set to Run Through the Summer

Badminton Camps Set to Run Through the Summer 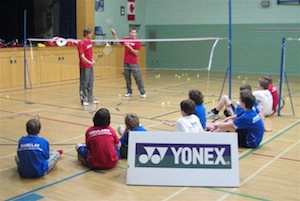 Badminton Manitoba will hold eight weeks of summer camps for kids to learn and become familiar with the sport.

The Winnipeg-based program will run weekdays from 8 a.m. to 4 p.m. over an eight-week period.

Summer camp coach Ian Laidlaw started his badminton career as a “summer camper,” and now has won his share of provincial titles and was even honored enough to make Team Manitoba for the 2011 Canada Winter Games in Halifax.

The Badminton Manitoba Summer Camps will be held at the Winnipeg Winter Club or Wildewood Club starting July 4 to 8, and running until August 22 to 26. Registration can be done online at Badminton.mb.ca.

← Previous: 'Peggers Encouraged to Take Part in Muscular Dystrophy Walk Next: Free Public Forum to Be Held on Bacteria and Antibiotics →
Tags: