Home » Entertainment » U2 Stage Going Up at Canad Inns Stadium

U2 Stage Going Up at Canad Inns Stadium 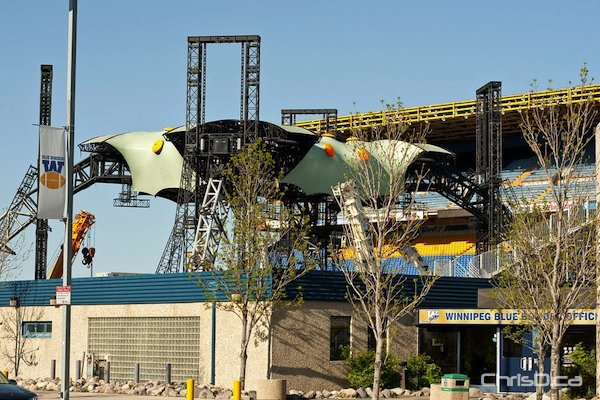 The elaborate stage for U2 is assembled at Canad Inns Stadium on Wednesday, May 25, 2011. (TED GRANT / CHRISD.CA)

More than 100 semi-trailer trucks made the trip to Winnipeg in preparation for the U2 concert in Winnipeg this coming Sunday.

Canad Inns Stadium has been a hub of activity this week, as crews work to erect the massive stage that travels North America with the international super group.

There are two more stages exactly like it that get put up in other cities while stage hands work to dismantle the other ones to keep the schedule on track.

Because of the added congestion at the stadium, the Winnipeg Football Club is letting fans know that access to the Blue Bomber Store is now restricted. The store will be closed beginning today and will re-open on Tuesday, May 31, after the stage has come down.

The Blue Bomber office and the season ticket office will be closed on both Saturday and Sunday.

More than 50,000 people are expected to attend Sunday’s show.

To prepare, U2 has rented out the Burton Cummings Theatre beginning today for rehearsals.