Home » Entertainment » U2 Fans Stake Out the Burt for Rocker Sightings

U2 Fans Stake Out the Burt for Rocker Sightings 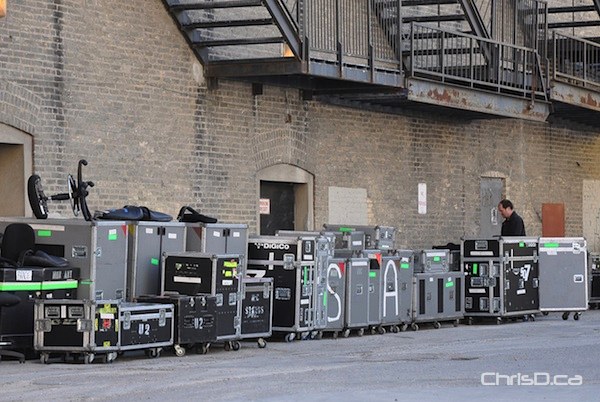 Equipment for U2 sits outside the Burton Cummings Theatre on Thursday, May 26, 2011. (MAURICE BRUNEAU / CHRISD.CA) 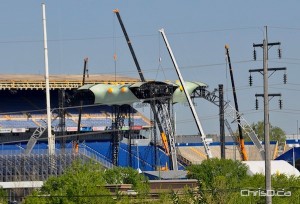 Cranes work to put up the elaborate stage at Canad Inns Stadium for this weekend's U2 concert on Thursday afternoon. (MAURICE BRUNEAU / CHRISD.CA)

Irish rockers U2 don’t perform in Winnipeg until Sunday, but on Wednesday, the buzz was all about the Burton Cummings Theatre.

According to reports, the band has rented out the theatre to practice and film part of a documentary. Fans began making their way downtown to see if they could catch a glimpse of the band, but were out of luck.

The crew that was unloading U2’s equipment told reporters Bono and the rest of the band weren’t expected in the city until yesterday night. Word of their anticipated arrival sent Twitter into a spiral late in the day, with rumours of fancy private jets landing at James Richardson International Airport.

Between fake Gary Bettman sightings and now U2, the city has been a hubbub of unconfirmed reports the last several days.

Meanwhile, over at Canad Inns Stadium, work is ongoing to complete the construction of the massive stage the band will use Sunday night as part of its 360° Tour. About 50,000 people are expected to attend. Rain looks to be in the forecast, so plan to get a little wet if you’re attending.