Home » Entertainment » Behind the Scenes of U2’s Stage Setup (VIDEO)

Behind the Scenes of U2’s Stage Setup (VIDEO)

Finishing touches are being put on the largest concert stage ever to tour at Canad Inns Stadium today.

U2 will play to about 50,000 fans later tonight under “The Claw,” a 360-degree stage constructed by hundreds of crew over the span of five days.

On Saturday, the production director gave media an inside look at what it takes to put on the show.

About 173 semi-trailer trucks haul the pieces needed to erect the elaborate stage across North America. There are two others identical to it that are currently in Edmonton and Seattle to keep the flow of production on track. It then takes about a day to dismantle the structure.

Asked if it’s the biggest stage in the world (which it is), Production Director Jake Berry said, “It would give you a pretty damn good idea behind me, wouldn’t it,” as he gestured to crews working behind him.

With lights, scaffolding, audio equipment and the giant video screen, there’s about 300 tonnes of weight being put on the steel beams that hold everything in place.

Over at the Burton Cummings Theatre, fans got a second chance to see the Irish rockers in person. Lead singer Bono made another appearance Saturday afternoon as dozens of fans waited patiently for some sort of action. The group signed autographs and greeted fans Friday evening and is using the theatre to shoot part of a new documentary. 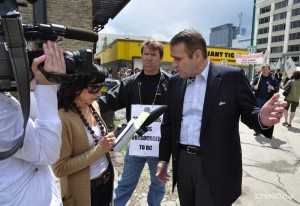 Barny Haines, a spokesperson for the IATSE Union, speaks to media on Saturday, May 28, 2011 outside the Burton Cummings Theatre in Winnipeg. (MAURICE BRUNEAU / CHRISD.CA)

Along with the fans were members of the IATSE Local 865 Union, which represents motion picture technicians. The group was protesting the decision not to hire local workers to assist with the production setup. A representative for the band said production hires are made by an outside party, and is not up to U2 personally. For continuity reasons, a travelling team familiar with the setup is utilized, along with a select number of local workers.

If you were looking to attend tonight’s concert, an additional 1,000 tickets have been made available through Ticketmaster.