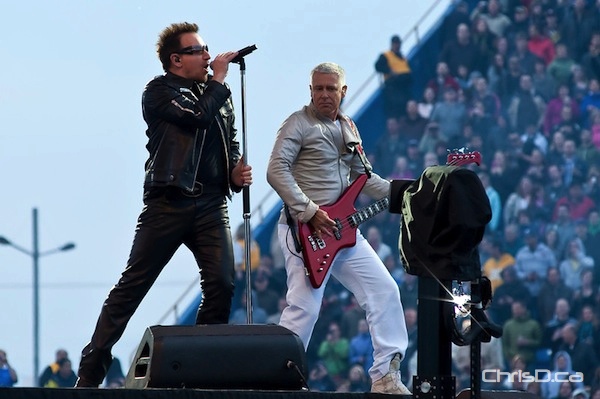 U2 lead singer Bono and bassist Adam Clayton perform Sunday, May 29, 2011. The Irish rockers played to a sold out crowd at Canad Inns Stadium in Winnipeg. (TED GRANT / CHRISD.CA) 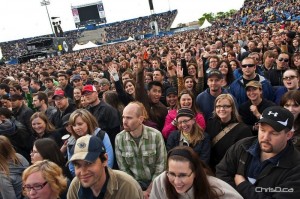 It would seem like the majority of Winnipeggers were at Sunday’s U2 concert, and with more than 50,000 fans in the stands, it was hard not finding someone with tickets leading up to the big show.

The Irish rockers made it on stage at about 9 p.m. and played to a sold out Canad Inns Stadium after opening act The Fray got the crowd revved up with hits like, “How to Save a Life.” The official tally from organizers was 52,000 fans packed into the soon-to-be-demolished football stadium. That sets a new local attendance record, beating out the previous record set by The Rolling Stones in 1994 with 50,815 people. 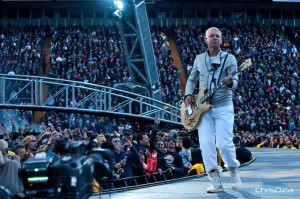 Fans began lining up for a spot on the floor Friday, bringing tents, sleeping bags and folding chairs to secure their spot in line. A sign up sheet and number system was put in place as hours drew closer to the show, making sure those who camped out were given first priority. Fans from New York, Toronto, the United Kingdom, and even as far away as Tokyo, mixed with local die-hards in line.

The logistics of moving a crowd so large into the stadium wasn’t an easy task. Organizers began shuffling those who showed up through metal turnstiles by early Sunday afternoon, as security attempted to sort the legitimate shoppers at Polo Park Shopping Centre from concert-goers looking for a parking spot in the nearby retail lots.

There was a few hiccups to note before U2 actually took the stage. The scrolling message on the video screen spelled ‘Winnipeg’ wrong, leaving out an ‘N,’ which was quickly reported by dozens of people on Twitter, complete with photos. That was followed by referring to Manitoba as a state, and not a province. Lead singer Bono addressed the unfortunate spelling error quickly. “Winnipeg with two N’s,” he said.

For a handful of fans, Sunday wasn’t the first time they got a chance to see Bono, The Edge and bassist Adam Clayton (Larry Mullen, Jr. is camera shy). The trio signed autographs and greeted fans on Friday night behind the Burton Cummings Theatre, where they were filming a documentary in the days prior to their concert. On Saturday afternoon, and again in the evening, Bono came out again to chat with those who waited hours to see the group.

View the photo gallery below from Sunday night’s show.

U2 lead singer Bono and bassist Adam Clayton perform Sunday, May 29, 2011. The Irish rockers played to a sold out crowd at Canad Inns Stadium in Winnipeg. (TED GRANT / CHRISD.CA)

VIDEO: Behind the scenes of U2’s elaborate stage at Canad Inns Stadium