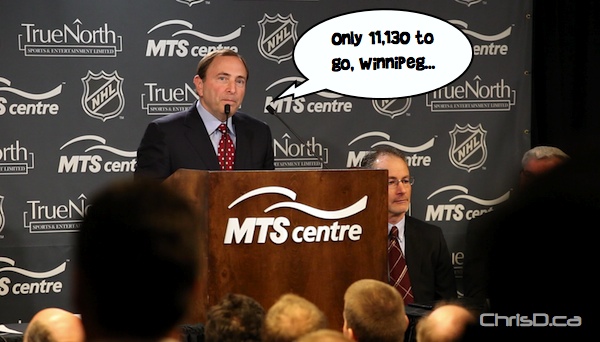 NHL Commissioner Gary Bettman has said Winnipeg's NHL franchise will not work unless the MTS Centre is sold out during every game. The goal of 13,000 season tickets sold will need to be reached by June 21. (DAVE WOWCHUK/ARTISAN MEDIA/CHRISD.CA)

On the first day of the NHL season ticket presale, True North Sports and Entertainment has sold 1,870 tickets since 1 p.m.

Not a bad start, considering only two of eight groups were eligible on Day 1 of the ticket drive toward 13,000. On Thursday, another group of eligible buyers will have a chance at ticket purchases, followed by another group on Friday.

On Saturday at noon, general season tickets will go on sale to the public.

First dibs were given to Manitoba Moose season ticket holders, and corporate partners and advertisers.

True North will provide daily updates at 4:30 p.m. on how many tickets have moved at Driveto13.com