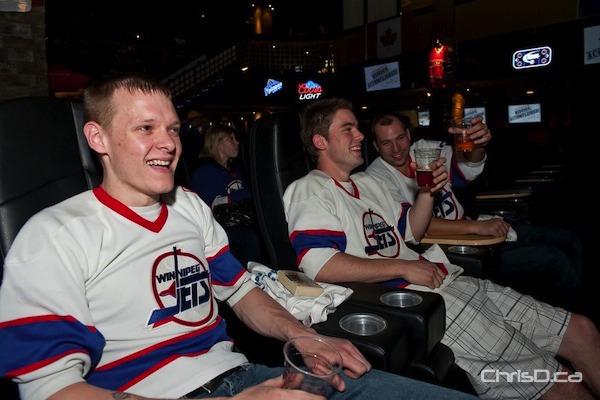 Fans gather at 4Play Sports Bar on Portage Avenue Friday, June 3, 2011 to celebrate the NHL's return to Winnipeg at the "Mission: Accomplished" party. Proceeds from the event will help send underprivileged children to see the yet-to-be-named team at MTS Centre. (TED GRANT / CHRISD.CA) 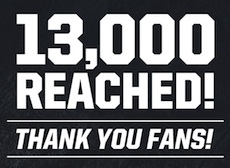 If you didn’t buy your NHL season tickets by now, you’re out of luck.

Groups of hockey fans huddled anxiously over multiple computers Saturday to scoop up NHL season tickets as part of the Drive to 13,000 campaign.

Tickets to the unnamed NHL team in Winnipeg went on sale at noon and were sold out in only 17 minutes.

The website Driveto13.com facilitated the ticket drive and handled the surge of traffic surprisingly well. It was the Ticketmaster website where the actual purchases took place that seemed a bit slow shortly after 12 p.m.

On Saturday morning, True North Sports and Entertainment confirmed tickets in sections P1 and P2 — the two most expensive tiers — had sold out.

Tickets were offered to Manitoba Moose season ticket holders and corporate partners as of Wednesday, with other select groups given access on Thursday and Friday.

Before the general sale, 7,158 tickets had been sold.

“We would like to take a special moment to thank all of our fans in Winnipeg, Manitoba, and Canada for their support over the past week, in particular, the overwhelming response of our fans which has resulted in a successful ‘Drive to 13,000’ campaign,” Jim Ludlow, president and CEO of True North Sports and Entertainment, said in a release just before 12:30 p.m. “The success of the campaign is a key ingredient to ensuring the sustainability and long-term viability of NHL hockey in this province. We look forward to seeing everyone this Fall at MTS Centre for opening night of regular season NHL hockey in Winnipeg.”

Due to the popular demand, TNSE will be starting a “membership only” based waiting list for tickets. Fans can place their names on the waiting list at Driveto13.com.