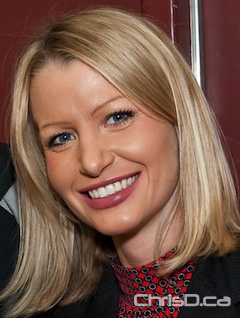 A well-known local reporter will fill the duties of anchoring the late night newscast at CTV Winnipeg beginning June 20.

Global Winnipeg’s Lindsay Warner will make the jump to take over for Susan Tymofichuk, who is going on maternity in a few weeks.

The Edmonton native will take on the one-year contract position CTV posted in April.

“For me, it’s a chance to connect with a new audience and deliver the news that matters most to them,” Warner said in an e-mail. “I’m a bit of a night owl, so I’m going to love it. I’m also really looking forward to bantering with the team, especially Leah Hextall. She’s a ball of fire. I like that.”

While most of Lindsay’s time will be spent behind the anchor desk, she also hopes to continue being out in the field and meeting people face to face.

“I hope I still get some chances with CTV, I’m sure I’ll miss that adrenalin rush that comes with chasing a big story.”

Lindsay has been anchoring Global’s weekend newscast ever since Nicole Dubé departed for Sun News in March, and began at the station herself in September 2008.

“I’m sad to be leaving my wonderful friends at Global, but I’m excited to start a new chapter with the bunch at CTV, and I’ll try my best to fill Susan’s talented shoes for the year.”

Asked if she will also be taking over Susan’s spot on the CTV curling team (yes, there really is one), Lindsay said, “No one told me I needed to know sports. Now I’m worried.”

We’re sure Ms. Hextall will have her up to speed on curling in no time, not to mention the knowledgeable Kevin O., who also shares the sports desk during the week.

Lindsay’s last day at the Shaw Media-owned station will be this Friday, while Susan will maintain her own anchoring duties until June 17.

A replacement at Global hasn’t yet been hired.