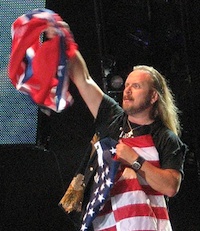 The rockers will bring their hits, such as Free Bird, Sweet Home Alabama, and What’s Your Name to the RBC Theatre at MTS Centre on Sunday, July 10.

Lynyrd Skynyrd’s most recent studio work God & Guns was released in September 2009 and debuted with resounding success beginning at Number 18 on the Billboard charts, the highest charting album for Lynyrd Skynyrd since their 1977 album Street Survivors.