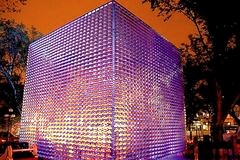 The entertainment line-up for this summer’s performances on the Cube Stage in Old Market Square has been revealed.

The Exchange District BIZ and Winnipeg Folk Festival are presenting the Folk Fest Concert Series, where free concerts will run over the noon hour.

The series will kick off with Sheepdogs today from noon to 1 p.m.

Next Tuesday, June 14, Wool on Wolves will be the entertainment, followed by The Heartbroken on June 29.

A number of other community organizations and groups will also be presenting concerts on the Cube Stage this summer. To see who else is performing, visit ExchangeDistrict.org/biz.