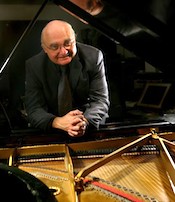 The Ron Paley Big Band will lead off the Winnipeg Art Gallery’s 34th season of Jazz on the Rooftop June 30.

Pianist, electric bassist, and composer, Ron Paley formed the Ron Paley Big Band in 1976 after playing with the big bands of Buddy Rich and Woody Herman, with whom he recorded two CD’s and played on a Frank Sinatra album.

Doors open at 6 p.m., with the concert starting at 7:30 p.m. Tickets are $21 for WAG members and $25 for non-members. Free gallery admission will be given to ticket holders on the day of the concert. A cash bar and an optional BBQ by Storm Restaurant will be available for $20.