Marijuana Seizure Made at Winnipeg Restaurant 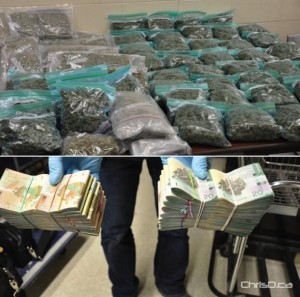 RCMP seized 30 pounds of marijuana and $30,000 in cash from a Winnipeg restaurant on Wednesday. (RCMP HANDOUTS)

Five men and four women are facing numerous drug-related charges after RCMP executed a search warrant on a Winnipeg restaurant.

Police raided the William Avenue restaurant on Wednesday, where they located 30 pounds of marijuana and $30,000 in cash.

Nine people, all Winnipeg residents, were arrested at the scene, and later released on a promise to appear.

The estimated street value of the seized marijuana is approximately $75,000.