Home » News » Pedestrian Killed After Being Hit by Truck

Pedestrian Killed After Being Hit by Truck 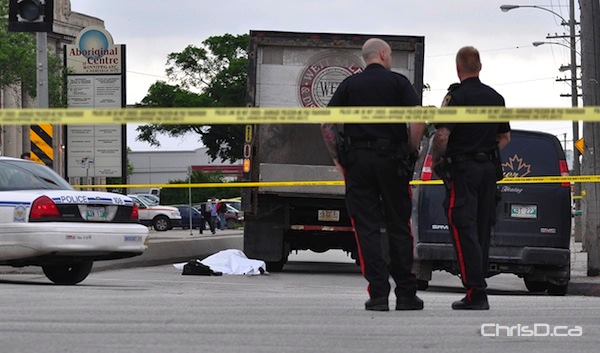 A sheet covers the body of a man killed by a truck Monday, June 13, 2011 in the area of Main Street and Higgins Avenue. (MAURICE BRUNEAU / CHRISD.CA)

A 41-year-old man was killed Monday afternoon after being struck by a large truck in downtown Winnipeg.

Police say the man was standing on the centre median on Higgins Avenue just west of Main Street when he lost his footing and fell onto the roadway shortly after noon.

The man was hit by a semi-trailer truck in the eastbound lanes of Higgins, who was completing a turn from northbound Main.

The man was pronounced dead at the scene.

Updated on June 14 with further information.