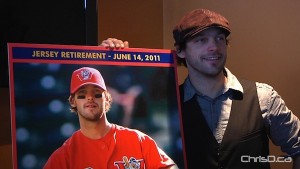 Former Goldeyes player Max Poulin during a news conference on Tuesday, January 11, 2011 to announce the retiring of his number. (WPGCAMERAMAN / CHRISD.CA FILE)

The Winnipeg Goldeyes will honour one of their former players tonight at Shaw Park.

Max Poulin will have his No. 6 jersey officially retired during the appropriately-titled “Max Poulin Night.”

Shortly before the opening pitch at 6:45 p.m., Poulin’s number will be placed above the outfield wall to immortalize his contributions to the Goldeyes over the years.

Following the ceremony, the former shortstop will sign autographs for fans on the concourse during the first couple of innings.

The first 2,000 fans through the gates at 6 p.m. will also receive a limited edition Max Poulin bobblehead.

A post-game fireworks display will round out the evening.

Watch video from January when the club announced Poulin’s jersey would be retired.