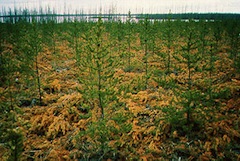 Manitoba's boreal forest and wetlands will be treated as a permanent protected traditional territory. (HANDOUT)

A large portion of Manitoba’s boreal forest and wetlands have been designated as a protected traditional territory.

Conservation Minister Bill Blaikie announced Thursday that 807,650 hectares of land on the east side of Lake Winnipeg will be protected — the largest designation in more than a decade. This new designation will increase Manitoba’s protected areas network to over 6.5 million hectares or 10 per cent.

“We have committed to protecting this area for future generations and bringing into law the management plan the Poplar River First Nation has developed,” Blaikie said. “We will continue to work with them to implement the plan for the Asatiwisipe Aki area and look forward to including it as part of the UNESCO World Heritage Site bid.”

“This is momentous,” said Eric Reder, Manitoba Campaign Director for the Wilderness Committee. “The future of the greatest forest left on the planet is more secure, while the desires of the local First Nation community are being supported. The Manitoba government got it right, and the Wilderness Committee and its thousands of members couldn’t be happier.”

Poplar River’s land management plan will be part of the UNESCO World Heritage Site bid which will be formally submitted in 2012.