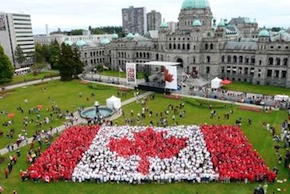 The Downtown Winnipeg BIZ is creating a "living" flag on Canada Day. (HANDOUT)

The Downtown Winnipeg BIZ will create a giant “living” Canada flag on July 1 by assembling volunteers in red and white T-shirts at the Manitoba legislature.

Victoria, B.C. has created their own flag in the past years, with more than 350 people during last year’s Canada Day celebrations. The goal of the Downtown BIZ is to assemble more people than Victoria had in 2010.

T-shirt distribution will take place at 10 a.m. on July 1, followed by the formation of the flag for a photo between 11:15 a.m. and noon.

“This is a fun event that’s a wonderful way to celebrate our country and our downtown,” said Stefano Grande, Downtown BIZ executive director. “We’re hoping people start their Canada Day celebrations off with us at the Ledge, then head over to The Forks, Central Park or Osborne Village to continue celebrating.”

Those who sign up before June 25 at DowntownWinnipegBIZ.com will be entered to win NHL tickets.