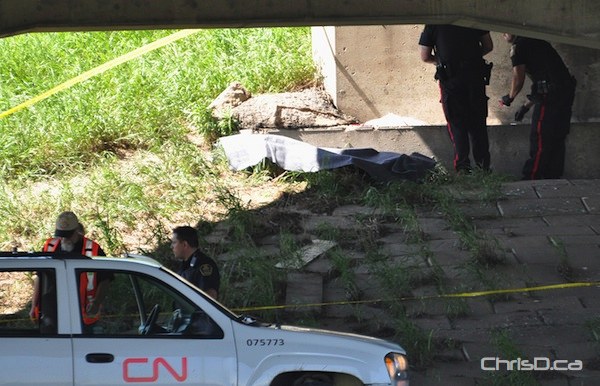 Winnipeg police investigate the discovery of a body under the Fermor Avenue overpass on Saturday, June 18, 2011. (MAURICE BRUNEAU / CHRISD.CA)

Winnipeg police are investigating after the body of a man was found under the Fermor Avenue overpass near Plessis Road Saturday morning.

Police were called at about 10:30 a.m. for what we’re told is a sudden death investigation.

Constable Jason Michalyshen says the investigation is still in its early stages, and the matter appears to be of a private nature.

Details on what led to the man’s death are still unclear, but police were still on scene by 2:30 p.m.

As the incident is located near the east end of CN’s Symington Yard, officials from the railway also responded.