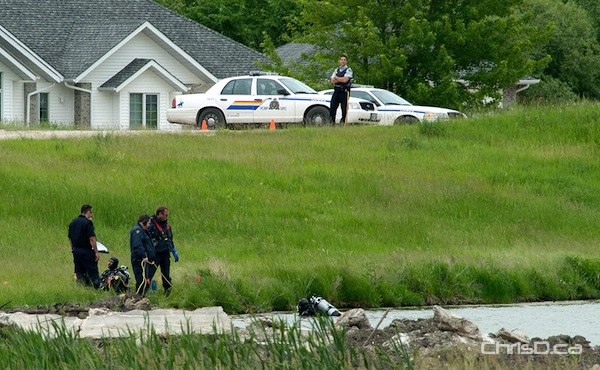 Police divers search a pond near Highway 75 south of Winnipeg on Monday, June 20, 2011 following the discovery of a body on Sunday. (STAN MILOSEVIC / MANITOBAPHOTOS.COM) 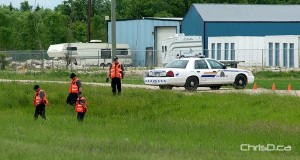 RCMP search a nearby field where a man's body was found on Sunday near Highway 75. (STAN MILOSEVIC / MANITOBAPHOTOS.COM)

RCMP have determined the body found in a pond near Highway 75 on Sunday is that of a 42-year-old Winnipeg man.

The man’s body was located in a retention pond just off the busy highway in the RM of Ritchot about four kilometres south of Winnipeg.

Investigators spent all day Monday at the scene, as divers remained in the pond looking for evidence. Police also set up a large perimeter around the area, where officers on foot searched through tall grass.

An autopsy was completed, but the cause of death hasn’t been determined.

The investigating is ongoing.

The man’s name hasn’t been released.