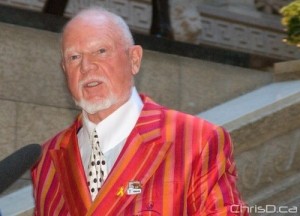 Production to the sequel of the Don Cherry mini-series is now underway in Manitoba.

“Keep Your Head Up  Kid: The Sequel” will be filming its two-part series for broadcast on the CBC over the next few weeks in the province.

The first of the series, “Keep Your Head Up Kid: The Don Cherry Story,” was shot in 2009. The movie attracted enough attention to earn multiple award nominations, including seven at the 25th Gemini Awards.

Producers will use MTS Centre during production, as well as the PCU Centre in Portage la Prairie.

Earlier this month, extras were called on to play a role in the film, filling the stands at MTS Centre as hockey fans.

Actor Jared Keeso is playing the role of Don Cherry in the series, and won the Gemini for Best Performance by an actor in a leading role in a dramatic program or mini-series.