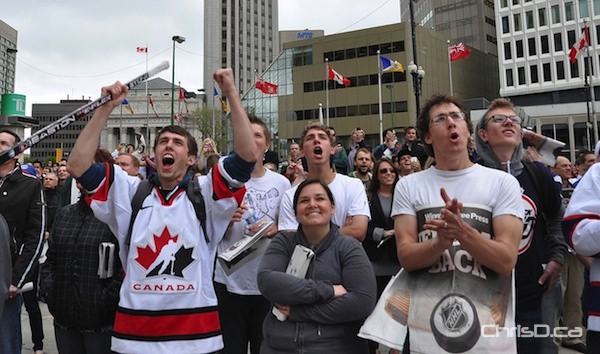 Fans cheer in the courtyard of 201 Portage Avenue as they watch the announcement being made that the NHL is returning to Winnipeg on Tuesday, May 31, 2011. (MAURICE BRUNEAU / CHRISD.CA FILE)

In what many saw as the last hurdle to clear for professional hockey to return to Winnipeg, the NHL Board of Governors unanimously voted to approve the sale and relocation of the Atlanta Thrashers on Tuesday.

During a meeting at a New York hotel, the League approved the sale of the team to True North Sports and Entertainment.

“We are very honored by the NHL Board of Governors unanimous decision today,” True North Chairman Mark Chipman said in a statement. “We know that the fans of this province have an appetite for NHL hockey that is rivaled by few in the league and intend to work very hard to make Manitobans proud of our franchise for years to come.”

A new website was also launched today at Winnipeg.NHL.com.