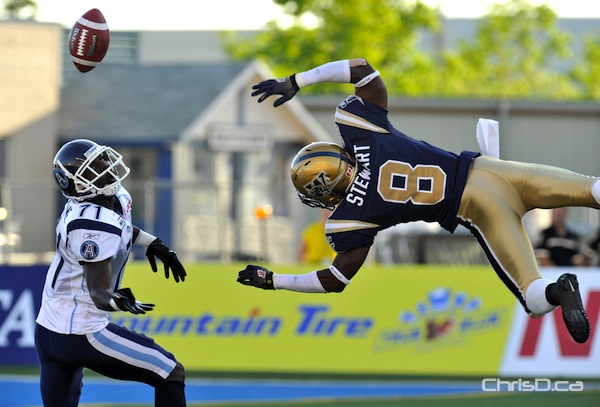 Toronto Argonauts wide receiver Djems Kouame (71) and Winnipeg Blue Bombers defensive back Brandon Stewart (8) attempt to catch the ball during the first half of their CFL pre-season game at Canad Inns Stadium in Winnipeg on Thursday, June 23, 2011. (FRED GREENSLADE / REUTERS)

The Toronto Argonauts burst out of the gate against the Winnipeg Blue Bombers in their exhibition home opener Thursday night in front of 29,117 fans at Canad Inns Stadium. But as head coach Paul LaPolice explains, the Blue and Gold are simply trying to evaluate who exactly will be their starters, their backups, and their “packups.”

“We’ll make some cuts tomorrow (Friday),” said LaPolice. “Definitely. Not all of them, but some.”

Because this is still preseason football, ideal player matchups often take a back seat.

“We tried to put a lot of our number twos against their number ones to make sure we get good evaluations from those guys.”

On only their third play of the game, quarterback Cleo Lemon hit Brandon Rideau for a 37-yard TD down the right sideline to give Toronto a 7-0 lead.

After going two-and-out in their first offensive series, Winnipeg’s Marcellus Bowman forced a Toronto fumble that Joe Lobendahn recovered and returned nine yards to the Argo 17. A 21-yard Justin Palardy field goal made it 7-3 Toronto.

The Argos and Bombers then each added a pair of field goals, making it 13-9 Toronto at the half.

Starting quarterback Buck Pierce made his first on-field appearance of 2011, playing two drives into the second quarter before being replaced with Winnipeg’s apparent number two, Joey Elliott. Pierce finished his day 10-for-14, for 71 yards and no touchdowns. Overall, it was a pretty conservative outing from Winnipeg’s first-team offense, as they rarely pushed the ball deep, opting to play small ball and work their receivers’ shorter routes.

The second half began similar to the first, with a Toronto touchdown in the early minutes as Jerome Hewitt returned a Winnipeg punt 59 yards to the house, extending the Argonaut lead; 20-9.

As backup Joey Elliott continued his work at the helm into the fourth quarter, Winnipeg’s offensive production — or lack there of — continued to worsen.

However, early in the fourth the Bomber offense suddenly woke up, striking for a major as Elliott hit Clarence Denmark for a 14-yard strike. The scoring drive was sparked by an impressive 44-yard catch and run by Josh Bishop as he evaded three Argo tacklers to break the sideline scamper.

The Winnipeg defense kept the momentum going with a huge defensive stop on third and one on Toronto’s 36.

“Whenever the crowd got behind us… You felt the momentum shift,” said Elliott following the game. “It was a huge stop for us.”

The resulting Bomber field goal try was wide left, but as Toronto’s Hewitt attempted to take it out, Brandon Stewart forced a fumble giving Winnipeg the ball on the Toronto 4. Rookie running back Alex Henderson punched it in to tie the game at 23 with only a few minutes remaining.

As Winnipeg looked to possibly strike late and take their first lead of the game, Toronto’s Chad Kackert broke a 73-yard TD run with 33 seconds remaining, breaking the spirit of the nearly packed house to make it a 30-23 final.

Despite stumbling visibly at times, the special teams displayed flashes of brilliance with excellent tackling on their kick-cover teams, as well as a handful of explosive returns.

“Some of the young players stepped up and made some big plays,” said LaPolice. “(Clarence) Denmark, Josh Bishop, Johnny Sears. I think (Sears) had three kickoff return tackles in the first three kickoffs. There’s a lot of good, young, talented kids.”

LaPolice and GM Joe Mack now have their work cut out for them, as they have to reduce their active roster to 42 players by Saturday.

Winnipeg’s regular season kicks off on Canada Day in Hamilton.

During Thursday night’s game, the Blue Bombers announced plans to name a street after former quarterback and CFL Hall of Famer Ken Ploen.

Ken Ploen Way will be located at the west entry service road off of Chancellor Matheson Road next to the new stadium at the University of Manitoba.

A street sign was unveiled when Ploen was honoured during half time.

By noon on Thursday, the Bombers had sold a record-breaking 21,155 season tickets. The previous record was 18,642 in 2008, when the team came off a Grey Cup appearance.