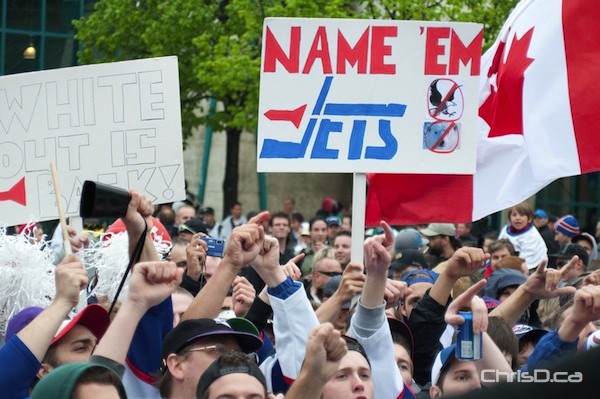 Thousands of people celebrate at The Forks on Tuesday, May 31, 2011 to mark the NHL's return to Winnipeg. (SAMANTA KATZ / CHRISD.CA FILE)

Winnipeg’s new NHL franchise will be called the Winnipeg Jets.

“On behalf of the Winnipeg Jets…,” Chipman said, as he introduced general manager Kevin Cheveldayoff to the podium.

Several hockey reporters tweeted Friday afternoon that the team’s name would in fact be the Jets, which quickly spread across the Twitterverse, becoming one of the most trended topics of the day.

A number of names had been thrown around to rename the former Atlanta Thrashers, such as Falcons, Polar Bears and even keeping the name of the city’s former AHL team, the Manitoba Moose.