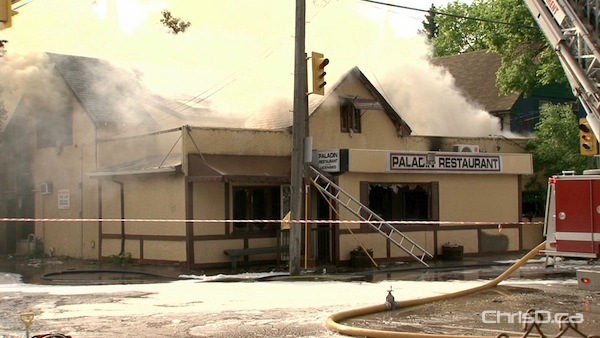 Smoke billows out from the Paladin Restaurant at 588 Des Meurons on Sunday, June 26, 2011. (SHAUN McLEOD)

Fire ripped through the Paladin Restaurant in St. Boniface Sunday morning, destroying the eatery that’s been in the neighbourhood for decades.

The blaze broke out at around 6 a.m. and took firefighters several hours to contain. By 11 a.m., smoke could still be seen billowing out from the building.

The cause of the fire at 588 Des Meurons hasn’t been confirmed by fire officials, but a witness on scene said a deep fryer caught fire.

Firefighters used an aerial ladder to get a handle on the stubborn flames, as onlookers watched their favourite eatery burn from behind yellow police tape.

Damage is estimated at $1 million. The arson strike force is investigating.