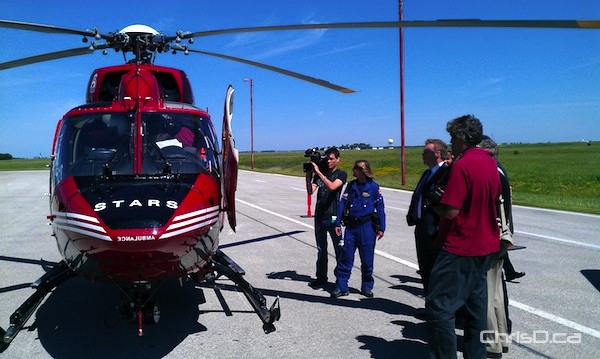 The STARS air ambulance will remain in Manitoba permanently. It was on display during the formal announcement at 2100 Saskatchewan Avenue in Winnipeg on Tuesday, June 28, 2011. (CHRISD.CA)

The Shock Trauma Air Rescue Society (STARS) helicopter is sticking around to assist with medical emergencies in the province.

The Manitoba government announced Tuesday an extended contract with STARS, which was brought in April 1 to transport Manitobans during the spring flood. Since its arrival, STARS has responded to 60 calls and transferred 34 critically-ill patients.

“The STARS team has made a real difference in Manitoba’s flood fight and we thank them for their hard work,” Health Minister Theresa Oswald said in a statement. “Helicopter transports save lives and improve outcomes for patients and this new agreement between Manitoba and STARS will form a permanent helicopter ambulance program for Manitoba and maintain the life-saving ambulance helicopter services currently in place.”

Following the contract extension of September 1, 2011, services will continue after that date as a permanent program.

The government also announced it will build a helipad at Health Sciences Centre to accommodate the air ambulance, as well as a seven-story, $39 million diagnostic imaging facility.

“Building the helipad as part of a new building at Health Sciences Centre will ensure direct access for all patients who need the highest level of emergency care,” Oswald said. “The facility will also house state-of-the-art diagnostic imaging equipment, providing a site for all diagnostic services used by Children’s Hospital.”

The facility will house more than $10 million in equipment, including a new pediatric MRI, waiting room, nursing station and support spaces.

Construction on the new facility is expected to begin in August and will take approximately two years to complete.