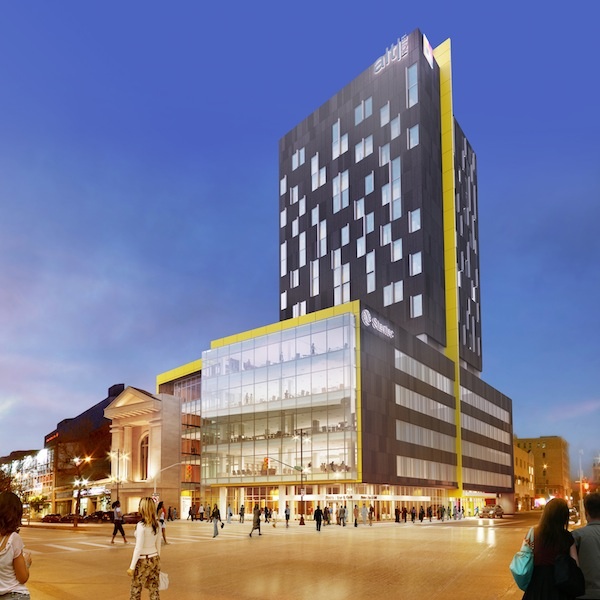 CentreVenture Development Corporation announced Tuesday plans for the 200,000-square-foot ALT Hotel and Stantec office located at the site of the former A&B Sound building at 311 Portage Avenue. Currently housing the MTS Centre Exhibition Hall, the building will undergo a severe transformation to revitalize Winnipeg’s downtown and draw more people to the city’s core. The project will be developed by Longboat Development Corporation and Groupe Germain Hospitality.

The private development investment will bring more than 250 employees to Stantec’s $30 million building when it opens in 2013. 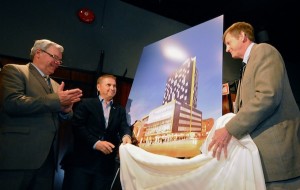 “Downtown Winnipeg’s historic comeback as an exciting destination for Manitoba families and visitors alike is in full swing,” said Premier Greg Selinger. “This major private investment next to the home of the reborn Winnipeg Jets demonstrates the kind of private-sector confidence that results when governments, agencies and community partners work together toward a shared vision of renewal.”

The $25 million hotel itself will include 154 rooms on the upper 12 floors of the building. The main floor will be retail and restaurant space, and offices on floors two to six, with Stantec occupying over half the available area.

The hotel’s name, ALT, means a “unique alternative to conventional hotels, at an accessible price — with easy access to transportation, services, businesses, and recreation,” according to CentreVenture.

“Getting control of the former A & B Sound building was critical to our ability to advance the Portage Avenue Strategy,” said Ross McGowan, president and CEO of CentreVenture. “In colloboration (sic) with the Forks North Portage Partnership, we were able to consolidate this site with the Mitchell-Copp building. The assembly of the two properties created a site large enough for a significant development and we are ecstatic that Longboat Development Corporation (LDC) stepped to the plate with a redevelopment plan. We believe the confidence LDC and ALT Hotels have in the downtown is just the tip of the iceberg and we will see increasing private sector investment in the downtown as a result of this bold development statement.”

A 450-stall parkade will also be developed on site at a cost of $20 million.