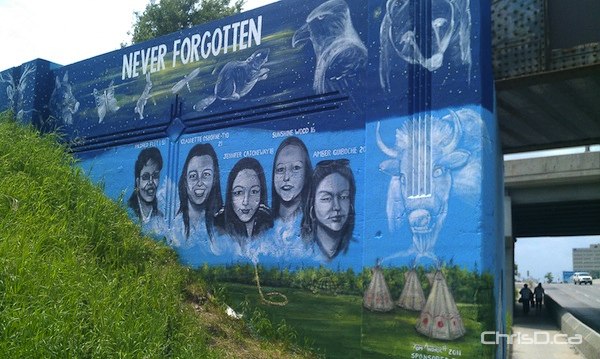 A mural on Portage Avenue shows the faces of missing and murdered aboriginal women, as created by artist Tom Andrich. (CHRISD.CA)

A mural representing a number of missing and murdered aboriginal women in Manitoba was unveiled Thursday.

Artist Tom Andrich created the “Never Forgotten” mural, which is located on the railway overpass near Polo Park on Portage Avenue.

The mural has two different versions. The north side includes portraits of five women who have been murdered, while the south side shows five women who are still missing.

Family members of the women joined Aboriginal and Northern Affairs Minister Eric Robinson for the unveiling.

← Previous: U of W Testing Eco-Friendly Vehicle on Campus Next: Two People Killed in Crash Near Minnedosa →
Tags: