$31.5M Athletic Facility Planned at U of W 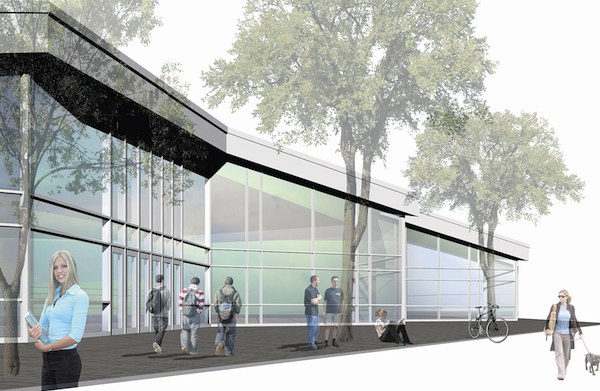 An artist's rending shows the future fieldhouse to be located at the University of Winnipeg. (HANDOUT)

The Manitoba government is injecting $15-million to help create a mixed-used wellness and athletics complex at the University of Winnipeg.

The $31.5-million fieldhouse will be located on the university’s Spence Street Promenade, and offer students, inner-city residents and youth new recreation options in the heart of downtown.

The complex will include a regulation-size indoor soccer field that will accommodate other sports such as lacrosse and touch-football. The complex will also include a 10,000-square-foot Wellness Centre, and a parkade.

Additional classrooms for athletics and kinesiology students will be included, as well as a robust community use protocol to ensure neighbourhood children and organizations have quality recreational opportunities.

Funding from the province was originally promised in 2007, when the university first announced the project.

“Manitobans are avid sport enthusiasts and soccer is one of the fastest growing sports in the province, enjoyed by all ages,” Premier Greg Selinger said in a release. “This new complex, which will be accessible to all, will help us meet the growing demand for a high quality facility in the city’s downtown.”

The City of Winnipeg has already put forward $2-million to the project.

Construction of the fieldhouse alongside Spence Street between the Duckworth Centre and the new bus loop near Portage Avenue is expected to start in the spring of 2012.

The province is also helping to fund a feasibility study which will determine the best location to locate another indoor soccer facility in the city’s north end.

← Previous: CAA Expecting Jump in Calls Due to Heat Wave Next: Splash Park to Open at River East Arena →
Tags: University of Winnipeg