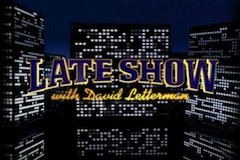 A recently-married couple from Dauphin made it on national TV Wednesday night when they were featured on “The Late Show with David Letterman.”

Program and music director Bruce Leperre from 730 CKDM tells us Eric and Talya Solski wore T-shirts from the radio station while in the audience, and caught the attention of Letterman himself.

Below the prominently placed 730 CKDM logo, the couple scrawled “Newlywed” in black lettering.

Letterman interrupted his Top 10 list to give the couple official “Late Show” T-shirts instead.

While interviewing Erica Hill, host of the CBS “Early Show,” Letterman asked her what it might be like in Manitoba early in the morning. Hill responded by saying, “cold.”

This is the second time in recent weeks Letterman has mentioned Manitoba on the show. In June, Winnipeg made it on to the show’s Top 10 list.

And last November, Letterman featured Gary Williams — mayor of Waskada, Manitoba — on the show for ‘kind of’ resembling him.