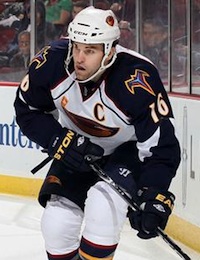 The Winnipeg Jets have locked down left winger Andrew Ladd with a new contract.

The 25-year-old was the captain of the former Atlanta Thrashers last season, recording 29 goals and 59 points in 81 games. He became captain on November 18, 2010 after being traded from the Chicago Blackhawks in exchange for defenceman Ivan Vishnevskiy and a second-round pick in 2011.

The deal comes hours before Ladd could have filed for salary arbitration if the Jets didn’t sign him.