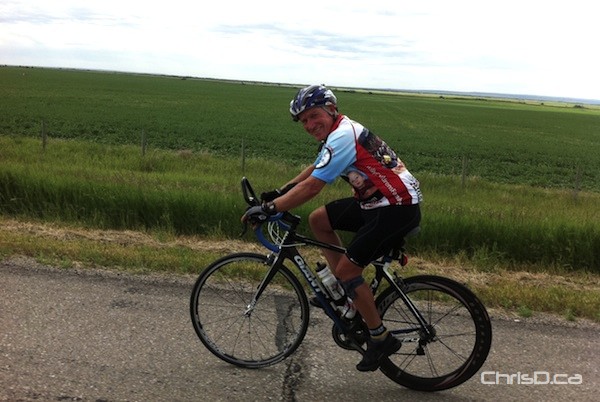 Arvid Loewen is cycling across Canada to break a world record and raise awareness for abandoned street children in Kenya. (HANDOUT)

A 54-year-old philanthropist is attempting the fastest bike ride across Canada after leaving Vancouver on July 1.

Arvid Loewen is aiming to break a Guinness World Record by making it from coast to coast in less than 13 days, 9 hours and 6 minutes.

Loewen is currently 20 hours ahead of record pace, getting only two hours of sleep each night before jumping back on his bike.

His inspiration for the journey is the thousands of orphaned and abandoned street children in Kenya who are being rescued by a charity called Mully Children’s Family (MCF).

Later today, Loewen will arrive in his hometown of Winnipeg to speak to media and supporters at the Manitoba legislature. His crew expects him to arrive between 6:30 p.m. and 7:30 p.m.

You can follow his 500-kilometre per day journey at GrandpasCan.com.