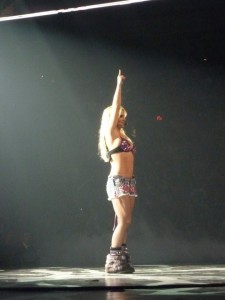 Britney Spears wears a pair of mukluks created by Winnipeg fashion designer Julie Pedersen during her concert at MTS Centre on July 4, 2011. (TWITTER)

A Winnipeg fashion designer had her wares worn by pop superstar Britney Spears on Monday.

Julie Pedersen is known for her line of fashion mukluks, which Spears sported during her performance at MTS Centre.

“Just before the show, I got this email from Britney’s boyfriend (Jason Trawick), saying how much she liked them and how she was going to work them into the show,” Pedersen said. “I thought to myself, ‘Well, we’ll see if she actually wears them.’ And then at the end of the show he emailed again to say she’d worn them for Baby One More Time, and three more songs.”

Staff from MTS Centre contacted Pedersen last week to request a pair of the custom-made spats with Spears’ insignia.

Pedersen has already been in contact with Spears’ boyfriend about designing a pair of boots to go with the new spats, and has her fingers crossed the increased exposure will raise her profile among Britney’s fanbase.