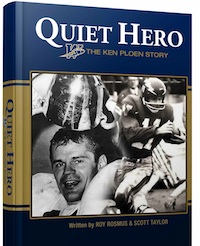 Winnipeg Blue Bombers legend Ken Ploen is sharing his life in the CFL in a new book entitled Quiet Hero.

The book is the story of the greatest decade in the history of the Winnipeg Football Club to date, but also the story of one of the most remarkable football players on either side of the Canada-U.S border. The young man who brought Iowa its first Rose Bowl was also a young man who finished with an engineering degree, married another Iowa graduate, raised three terrific kids in Canada and has remained a leader in his community of Manitoba for nearly 60 years.

Ploen has many accomplishments to his name, including being a four-time Grey Cup champion, a member of the Canadian Football Hall of Fame, Blue Bomber Hall of Fame, and Manitoba Sports Hall of Fame.

Ploen will be at the Bomber Store on Saturday from 1 p.m. to 3 p.m. to sign copies of the limited edition book.