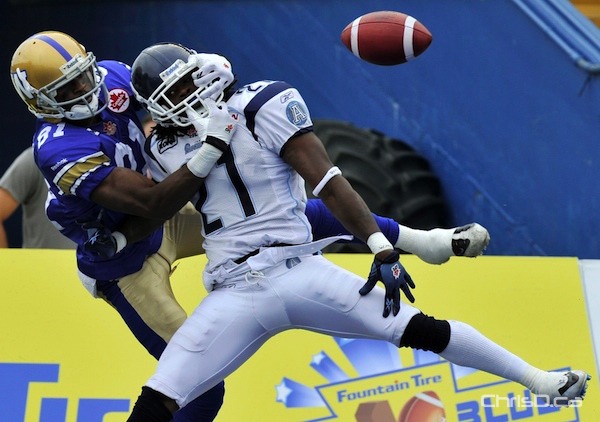 Toronto Argonauts defensive back Lin-J Shell (21) is taken down by Winnipeg Blue Bombers wide receiver Cory Watson (81) as the ball is passed into the end zone during the first half of their CFL football game in Winnipeg on Friday, July 8, 2011. (FRED GREENSLADE / REUTERS)

WINNIPEG — Despite the lack of major scores Friday night, the 27,638 fans that packed into Canad Inns Stadium were treated to a very entertaining football game between the Winnipeg Blue Bombers and their East Division rival Toronto Argonauts. The Bombers forced five Argo turnovers on their way to a 22-16 win, making it their first 2-0 season start since 2003.

The two subsequent drives saw the teams trade interceptions — the first by Dee Webb on Bomber quarterback Buck Pierce, and the second by Jovon Johnson on Argo quarterback Cleo Lemon. It would be the only Bomber turnover on the night.

Justin Palardy then scored a single when he was wide from 39 yards out — his first of two missed field goal attempts in the half.

Early in the second quarter, Jovon Johnson nearly picked off Lemon again in what would’ve been an easy six deep in Argo territory. But the Bombers used the momentum to get Fred Reid two carries inside the Toronto 5 that resulted in a major, making it 8-3 Winnipeg.

A 40-yard Palardy field goal in the second quarter’s final seconds made it 11-3 entering the break.

Despite only losing one, Toronto fumbled five times in the first two quarters.

The opening minutes of the second half saw a Jonathan Hefney sack that pushed Toronto deep into their own end, forcing Noel Prefontaine to take a knee in the end zone, extending the Winnipeg lead to 13-3.

The Argos scored on their next possession, as Cleo Lemon ran it in from 9 yards out to cap a lightning quick three-play, 51-yard drive to get back within a field goal.

Trailing 19-10, Toronto answered by moving the chains in two consecutive offensive drives that were both capped by Prefontaine field goals (43,44), making it a three point Winnipeg lead with 2 minutes remaining in the fourth.

A late Argo fumble recovered by Joe Lobendahn allowed Winnipeg’s Palardy to add another three points to make it a 22-16 final.

“When we take the ball away as much as (we did), that helps your cause dramatically,” said head coach Paul LaPolice following the game. “I thought we were tremendous, and that’s something we preached. We said as a team, we wanted to be the best ball security team and the best takeaway team in the league.”

Defensive end Odell Willis, who was credited with two of the Bombers’ seven sacks, harassed Cleo Lemon all night.

“I’m just proud that the team came out, played hard, and we finished,” said Willis. “Last year we kept coming up short — four points… but this year we know what it takes.”

Willis referred to the 2010 campaign where his team lost nine games by four points or less.

Buck Pierce, who hasn’t played a regular season CFL game since September when he dislocated his throwing elbow, finished his day 21-of-34 for 165 yards, with one interception and no touchdowns.

“I needed to be more consistent, but we found guys when we had to,” said Pierce. “It’s getting there. These things take time. I like what we’re working with, and the guys up front are doing a hell of a job as well.”

The Bombers now have a short week before hosting the Calgary Stampeders on Thursday, July 14.