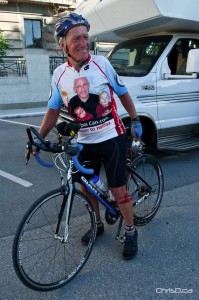 Arvid Loewen arrives at the Manitoba legislature in Winnipeg on Tuesday, July 5, 2011 after a gruelling bike ride that began in Vancouver on July 1. Loewen is peddling across Canada in support of the Mully Children's Family charity, which works to rescue street children from Kenya. To follow Loewen, visit GrandpasCan.com. (TED GRANT / CHRISD.CA FILE)

A Winnipeg grandfather on a cross-country cycling journey to break a Guinness World Record is nearing the finish line.

Arvid Loewen began cycling from Vancouver on July 1 and is attempting to make it to Halifax in under 13 days, 9 hours and 6 minutes (the current record).

The 54-year-old is raising money for one of his favourite charities, Mully Children’s Family (MCF), at the same time.

By Thursday morning, he was 250 kilometres outside of Halifax and is expected to arrive by 7 p.m. local time. He has to arrive before 9:06 p.m. to break the record.

Loewen has been putting in 20-hour days and is currently on a 36-hour sleepless sprint. He has now covered 5,800 kilometres in just over 12 days.

An incentive is waiting for Loewen at the end, with a generous donor willing to shell out $200 for every minute Arvid bests the world record — up to $30,000.

Loewen made a brief stop in Winnipeg on July 5 and was welcomed by family and friends before he continued east.