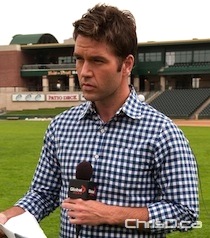 Global Winnipeg weather anchor Craig Larkins will soon depart the city and take on a new challenge in Edmonton.

Larkins will join the morning show at CTV Edmonton — which has yet to officially launch.

Larkins tweeted the news to his roughly 1,000 Twitter followers on Friday. “Hey friends! Thanks for all your support..I’m heading west to join the new CTV Edmonton morning show. Very excited about this new chapter!,” the tweet read.

Before returning to his hometown in recent years, Larkins worked at the CTV affiliate in Sudbury, Ontario.

His last day on the air locally will be Friday, July 22.

Also soon to be joining the Edmonton station is Laura Lowe, former political reporter at CTV Winnipeg. She will begin in August.