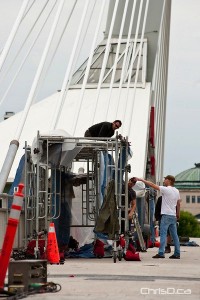 A film crew works on the set of "Faces in the Crowd" during a shoot on the Provencher Bridge in Winnipeg in May 2010. (TED GRANT / CHRISD.CA FILE)

Along with the recent bout of sizzling temperatures in Manitoba has also been a peak interest in creating film and TV projects in the province.

According to On Screen Manitoba, Manitoba Film and Music has received more than 35 scripts since April for consideration in using Manitoba as a filming location.

MFM has also been hosting visiting producers to show off potential locations in the province. The organization also recently met with dozens of producers at the AFCI Locations Show/Producers Guild of America to promote co-production or co-ventures with Manitoba companies.

Earlier this week, the Dakota Community Centre in St. Vital was being used to shoot a Christmas-themed movie.