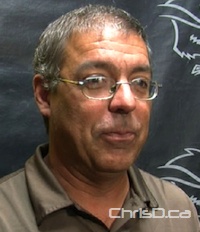 Berube will handle duties for the student-athlete team in Shenzhen, China from August 12 to 23.

“We are excited to bring such a large team to the Universiade and seek to further improve on recent past team performances at this prestigious international event,” Berube said in a release.

This is Berube’s 15th season with the Bisons and the second time since 2007 he’s been named coach for Team Canada at Summer Universiade. Berube was also a staff Universiade coach in 2005.