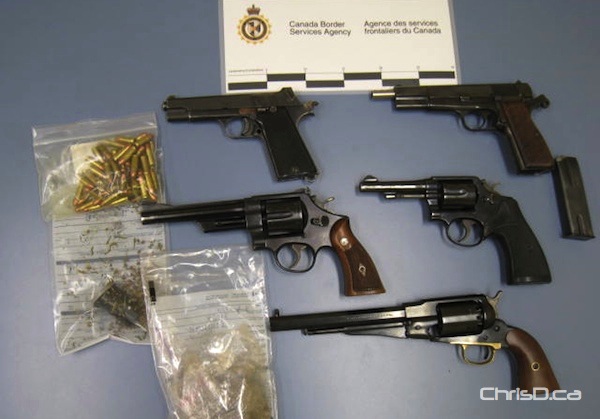 CBSA officers seized multiple handguns and drugs at the Boissevain border crossing during a search on Sunday, July 17, 2011. (HANDOUT)

Officers at the Boissevain, Manitoba border crossing discovered a large haul of illegal goods on Sunday.

The Canada Border Services Agency (CBSA) says officers seized five handguns, 40 rounds of ammunition, and 95 grams of marijuana and marijuana seeds. The items were discovered during a search of a recreational vehicle entering Canada from the United States, and were hidden within the vehicle’s panels and behind the microwave and television units.

The driver of the vehicle was arrested and returned to the United States with a $6,600 fine.

“This seizure demonstrates the commitment CBSA officers have in making sure our borders aren’t used for illegal activity,” said Darlene Klips, CBSA Director for Southern Manitoba. “Our laws are clear, and these types of enforcement actions help to keep Canada’s communities safe and secure.”