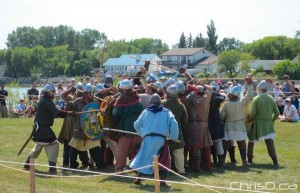 To help kick off the 122nd Islendingadagurinn (Icelandic Festival of Manitoba), patrons at the Winnipeg Free Press News Café may be lucky enough to play the role of a Viking this afternoon.

Organizers will launch the annual event — taking place July 29 to August 1 in Gimli — on the patio at 237 McDermot Avenue beginning at 1 p.m.

Willing participants in the crowd will be invited embrace their Inner Viking during the “Viking Tryouts.” Viking feats include donning a helmet with horns and a fur cape, drinking a shot of strong coffee (or Icelandic vodka), eating some hard fiskur and saying Islendingadagurinn three times. Would-be Vikings must complete this task with their best Viking Roar. The prize for completing the tasks? Being declared an honourary Viking and holding bragging rights.

In the event of rain, the event will be held inside.