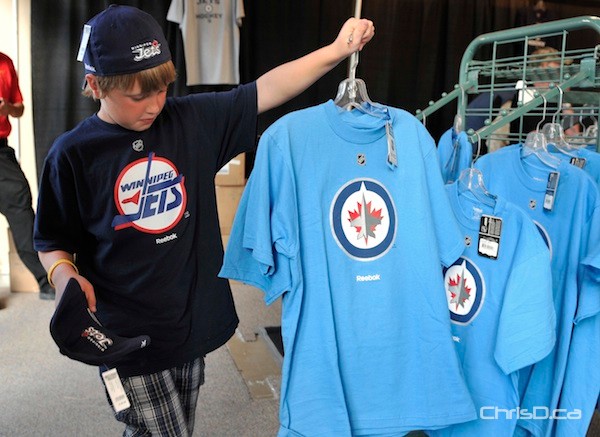 It didn’t really matter what the new Winnipeg Jets logo turned out to be, fans were going to embrace it regardless. That proved true Saturday morning, when authorized retailers began rolling out the new gear for Winnipeg’s NHL franchise.

Besides the eager fans who got their hands on T-shirts and hats Friday at MTS Centre, River City Sports, Royal Sports and a number of official online partners, had their first crack at ringing up orders for the Royal Canadian Air Force-inspired logo’d wear.

Lineups formed outside numerous locations in the city Saturday, and while the majority of fans were pumped to don the new brand, there were still many in the market for the classic Winnipeg Jets logo that the team wore up until 1995. By mid-afternoon, stock began to become scarce.

Reaction to the primary and secondary logos has been, for the most part, positive. A few online critics have let their feelings be known about the use of the maple leaf underneath the jet as being “too Canadian.” While others have commented that the jet in question is actually used in the U.S. Air Force, and that the words “Winnipeg” and “Jets” should have been included somewhere.

True North Sports and Entertainment unveiled the logo late Friday afternoon on WinnipegJets.com. Some reports suggest the organization was forced to reveal it earlier than planned after it leaked online Friday morning. An employee at a local retailer, who didn’t want to give his name, said staff had access to the shipments of merchandise before Friday, and said it would have been a real task to keep someone from peaking inside the boxes. “With something as anticipated as this (the unveiling of the logo), it’s hard to keep a lid on things.”

Despite the breach somewhere along the line, the Jets have a new identity now that fans will wear proudly in the city that once lost them.

The official team jerseys will be unveiled at a later date.

— With files from Sarah Klein