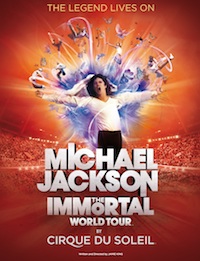 A second show has been added for Cirque du Soleil’s Michael Jackson tribute show at MTS Centre this fall.

Michael Jackson The Immortal World Tour will stop in Winnipeg as previously announced on Wednesday, October 26, as well as the following night on Thursday, October 27.

Tickets for the second show will go on sale through Ticketmaster at noon today. Prices range from $50 to $250 each.